The C8L is Sofirn’s newest addition to the C8 family of throwers. It may appeal to hunters due to a decent runtime and the smooth throwy beam produced by a single Cree XHP50.3 emitter with an orange peel reflector.

Earlier models in the C8 family used a single 18650 cell and had a single switch (tail switch). The C8L has an electronic side switch, a mechanical tail switch and it is powered by a 21700 Li-ion cell with a bit more capacity.

Sofirn provided this torch to celebrate reaching 10,000 users on their Facebook group. I have not been paid for this review nor have I held back my opinions.

A plain cardboard box with Sofirn branding was used with some foam. 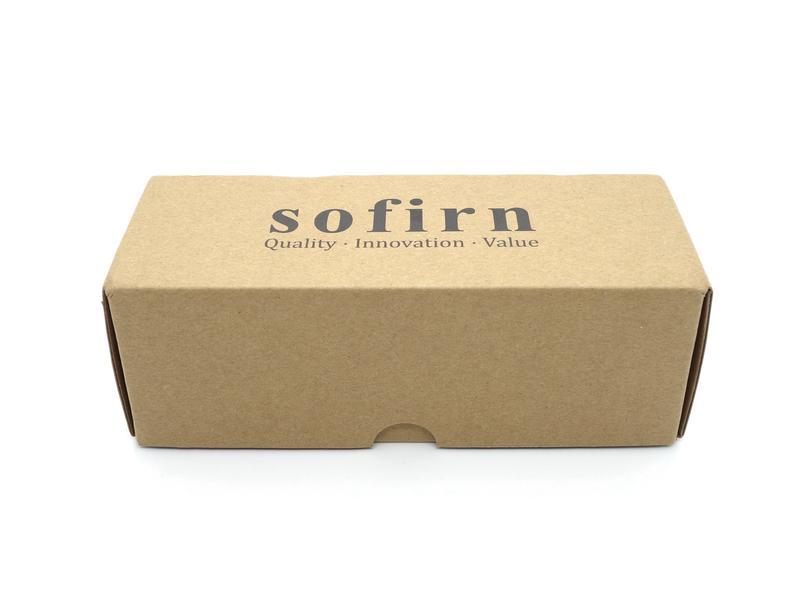 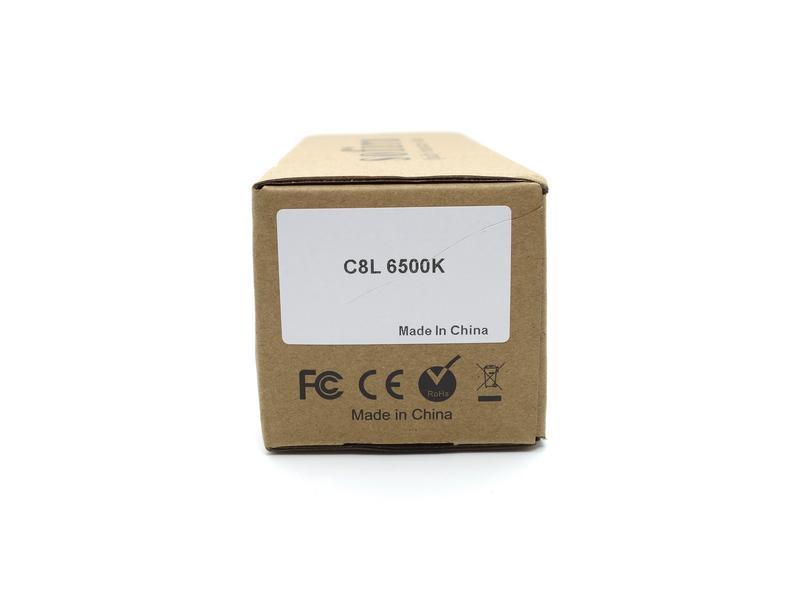 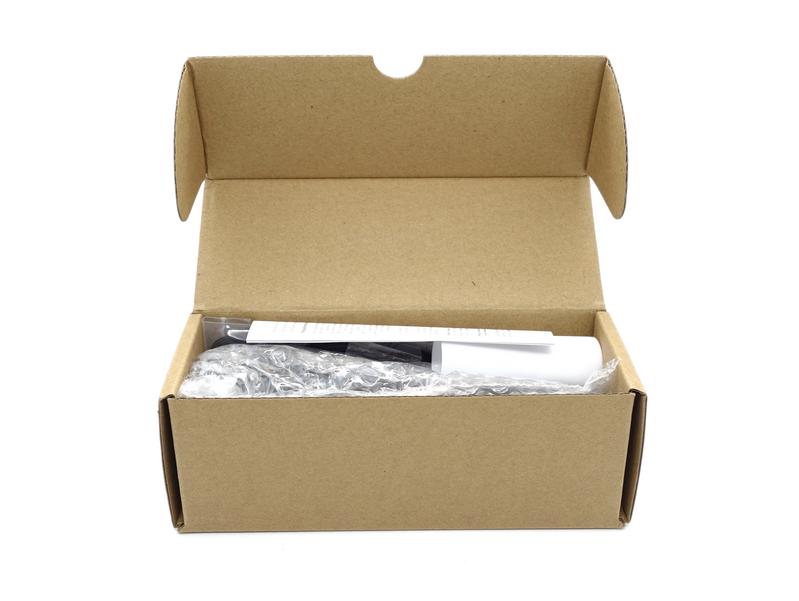 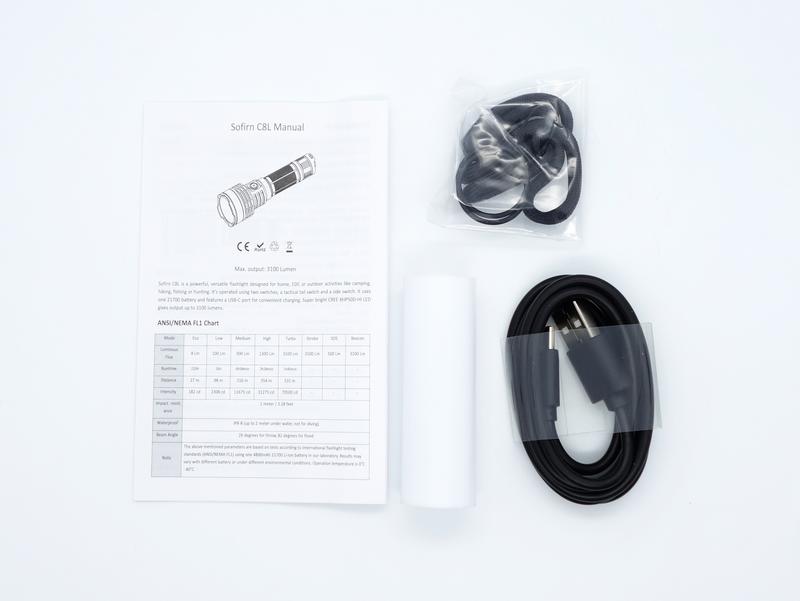 The C8L easily fits in my jacket pocket.

The dual switch design takes a little bit of getting used to. The mechanical tail switch is easy to use. Once the torch is on, you can change the brightness by pressing the side switch.

There are some sharp edges on the fins of the head. They are not very sharp but you could cut yourself if you tried (e.g. grip it hard while trying to unscrew the bezel).

The lanyard holes in the side of the tailcap allow a lanyard to be attached without getting in the way of tailstanding. However, the boot for the tail switch is massive and it prevents the torch from tailstanding. 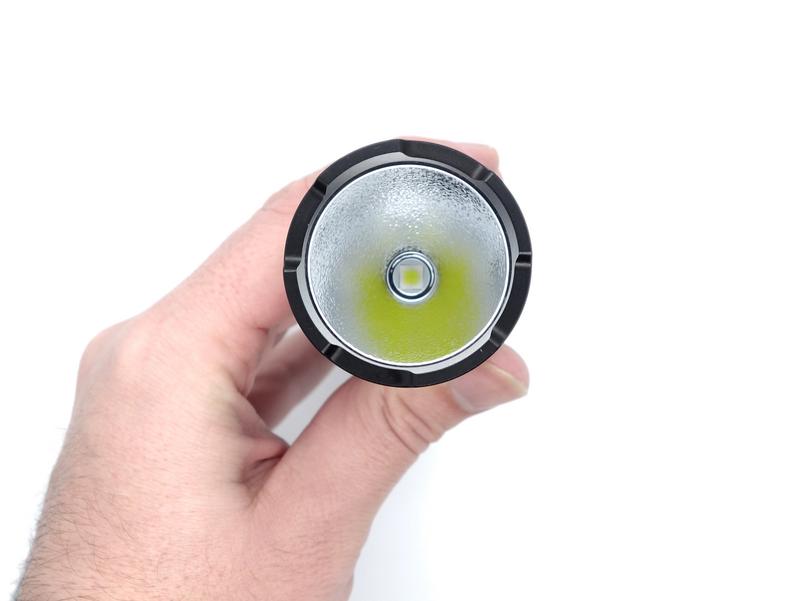 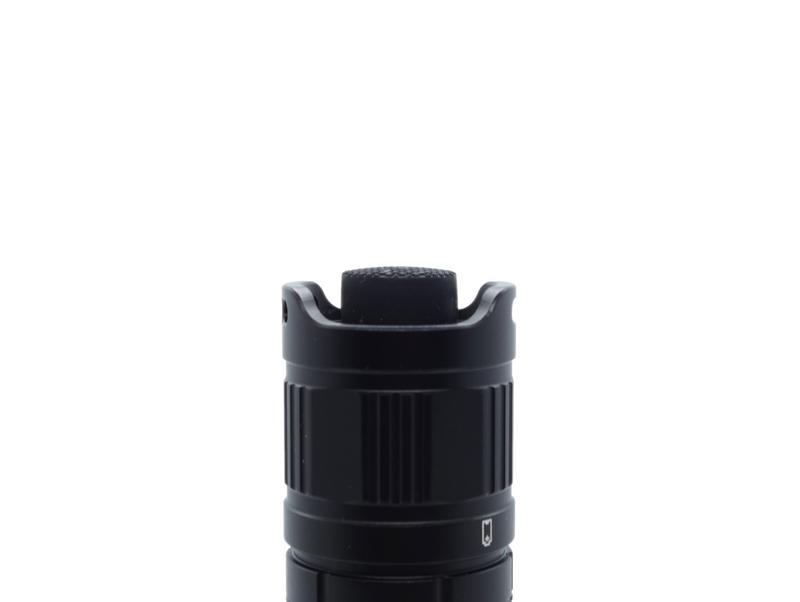 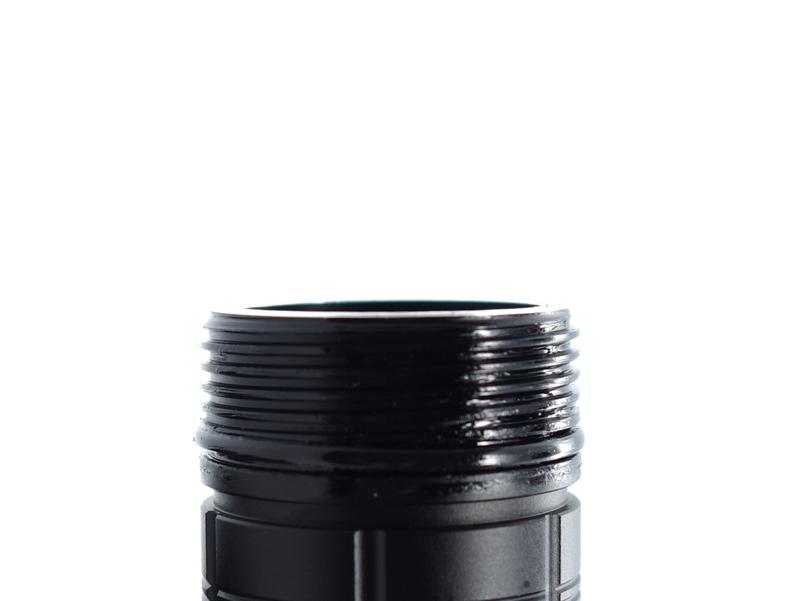 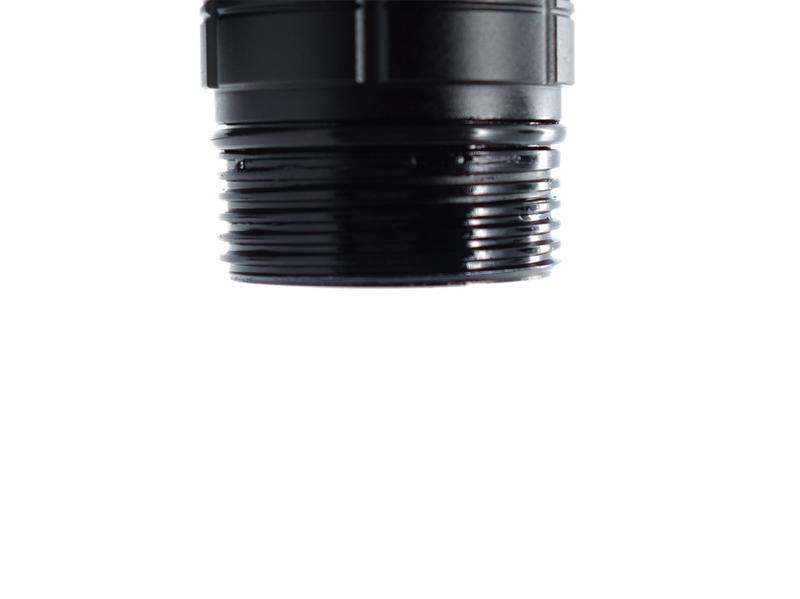 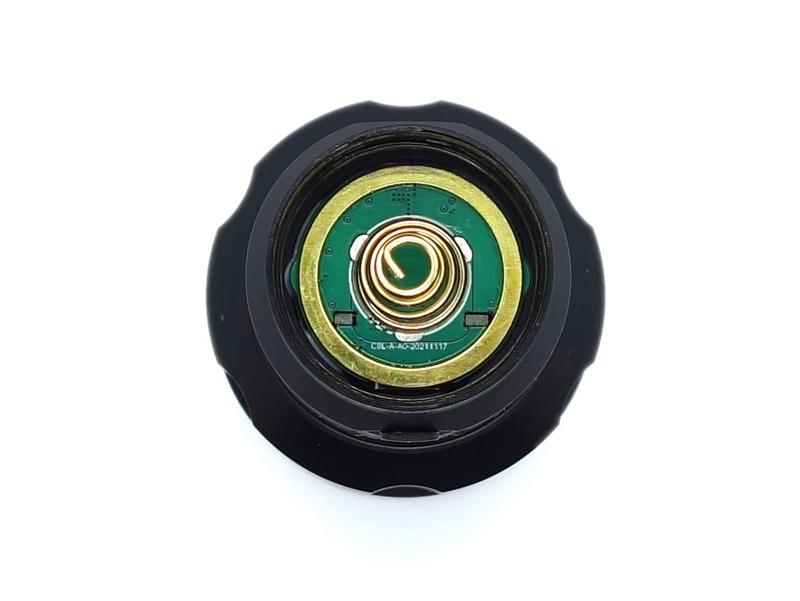 The anodising is fairly good. Square cut threads are smooth and well lubricated. The threads are also anodised.

Knurling on the tube provides some extra grip. The slim profile of the tube allows it to easily be mounted to a rifle with a clamp. The tube cannot be reversed because the diameter is smaller near the tail end.

The electronic side switch feels sturdy and has some resistance when pressing down. The tail switch is spongy due to the massive switch boot. Sofirn could reduce the switch boot size by a third and to allow the torch to tailstand.

Double springs were installed in the tailcap to reduce the risk of a cell disconnecting due to recoil from a firearm. 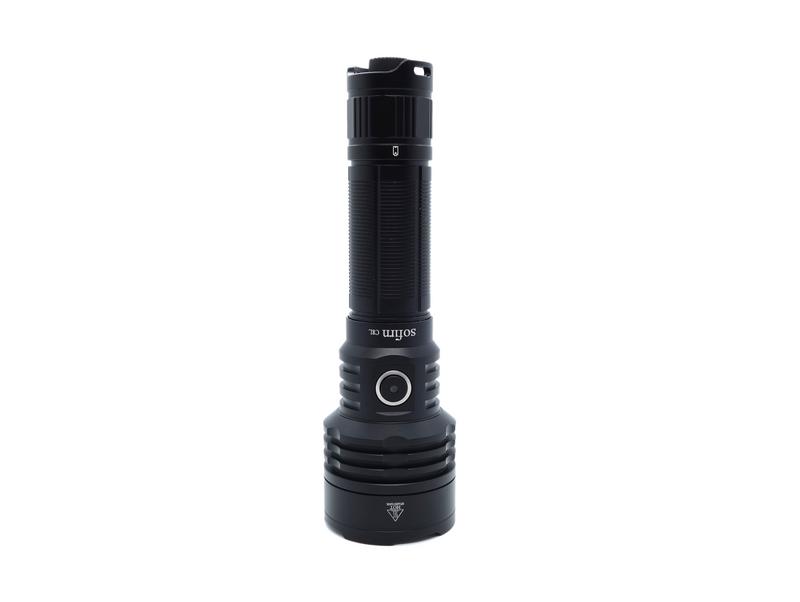 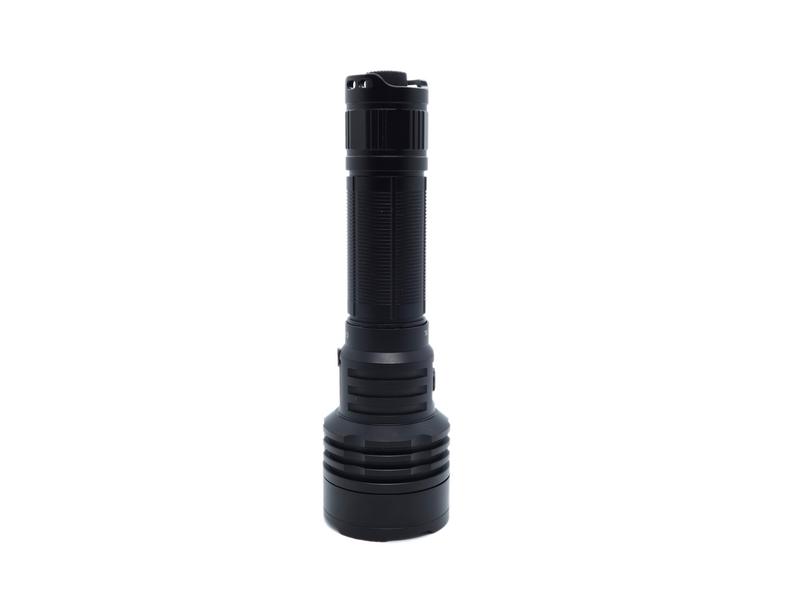 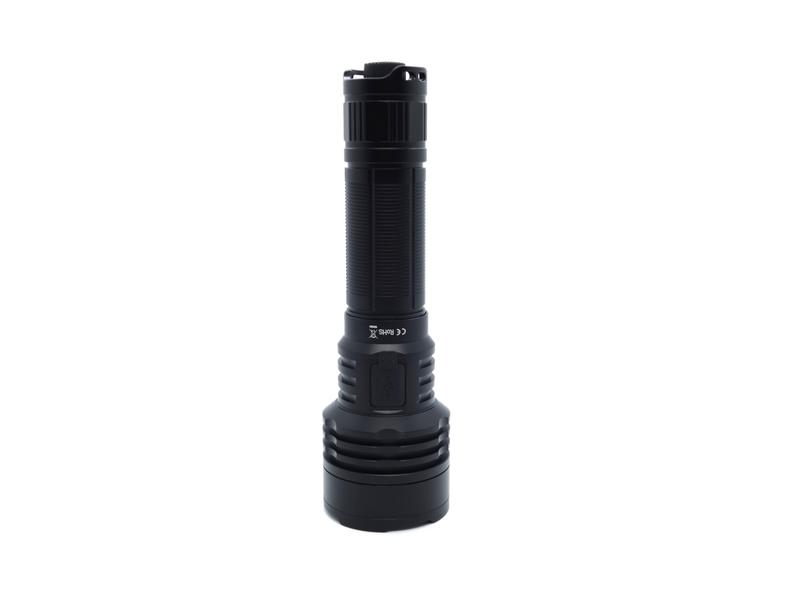 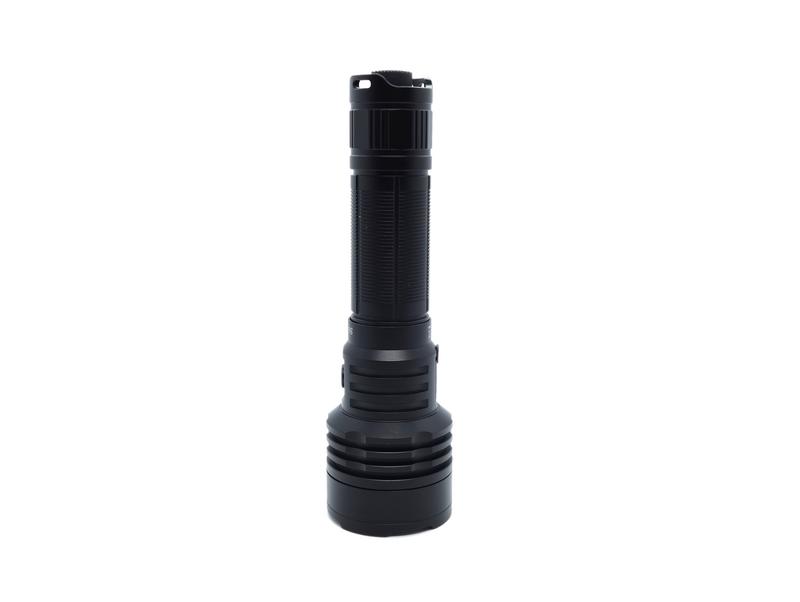 The C8L has one Cree XHP50.3 HI emitter with an orange peel reflector.

The lens does not appear to have an anti-reflective coating.

The bezel is screwed on tightly and might have glue on the threads.

I have taken Correlated Colour Temperature (CCT) and Colour Rendering Index (CRI, RA of R1-R8) measurements with the C8L positioned a little over one metre away from an Opple Light Master Pro III (G3).

The Delta u, v is more positive on lower modes. The beam is less green on High and Turbo.

EDC size comparison with its competition⌗ 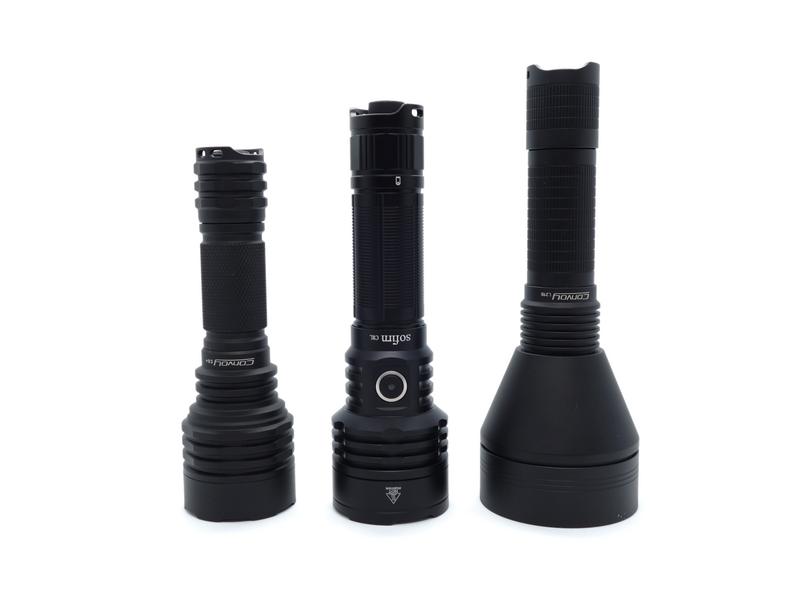 The side switch has a battery status LED. 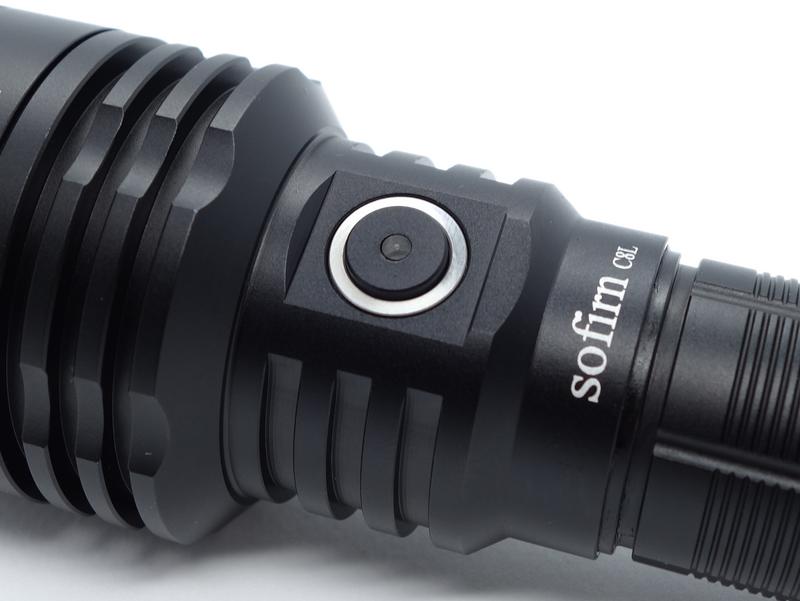 The LED displays the following colour when the torch is on:

I did not notice any visible PWM.

A Sofirn 21700 5000mAh cell was included inside the torch. The cell arrived with a voltage of 3.93V, and it was isolated with a piece of plastic.

A capacity of 4851 mAh was measured using Capacity Test mode at 1A with a Vapcell S4 Plus. 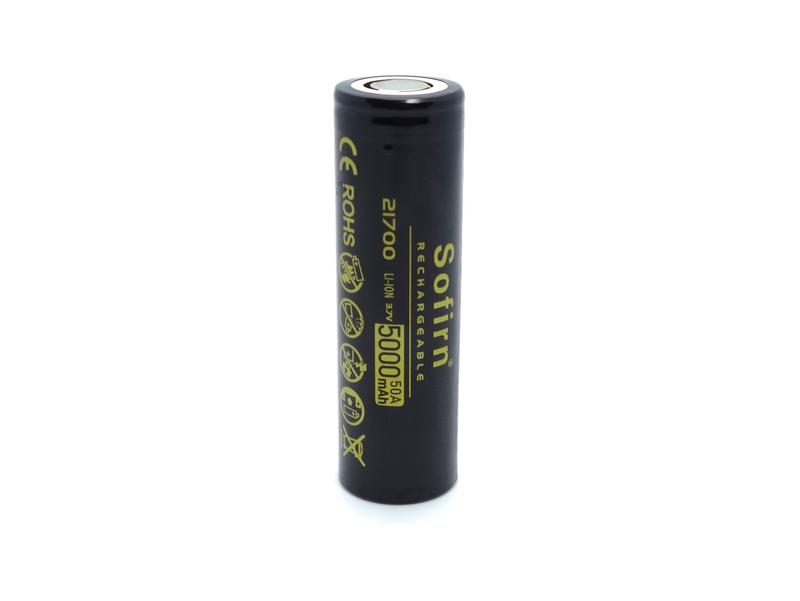 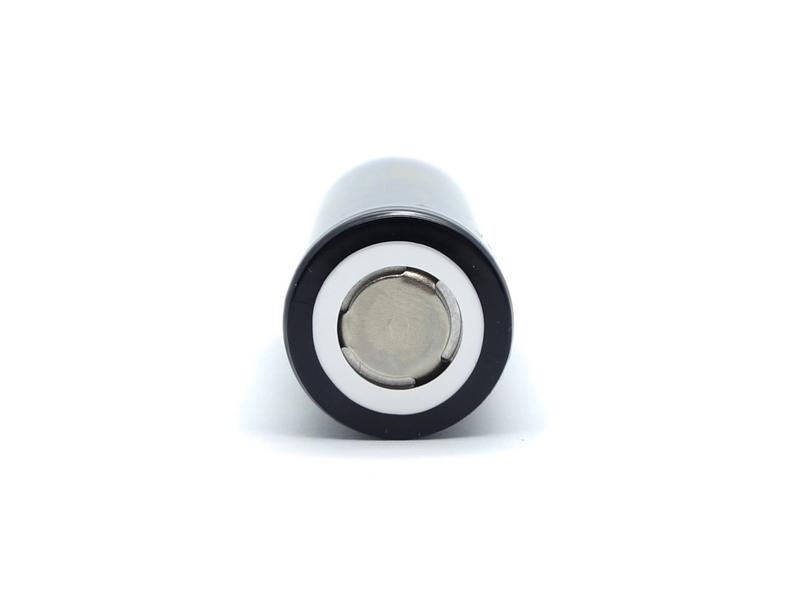 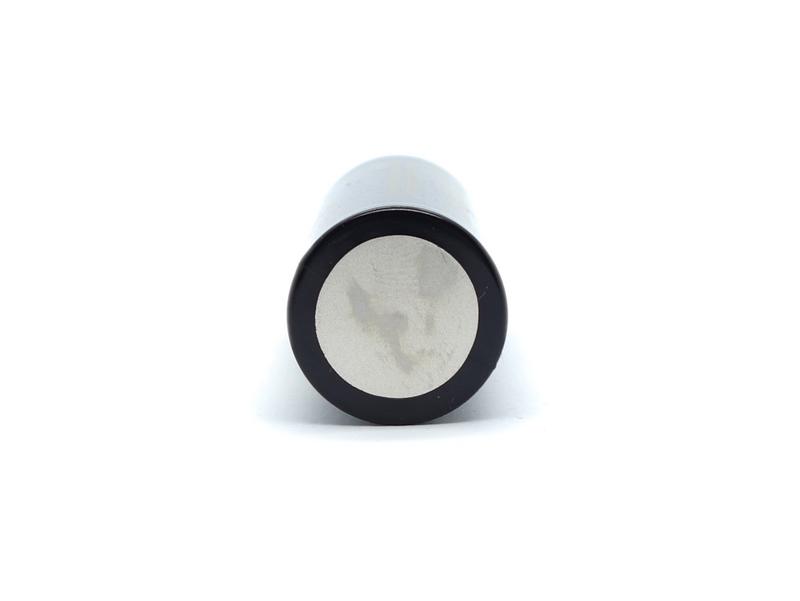 I tried the following power supplies with the C8L’s built-in USB-C charger:

Official specifications from the manual:

None. It has a mechanical tail switch.

Note: Lumen measurements may be off by more than 10% with my DIY lumen tube. 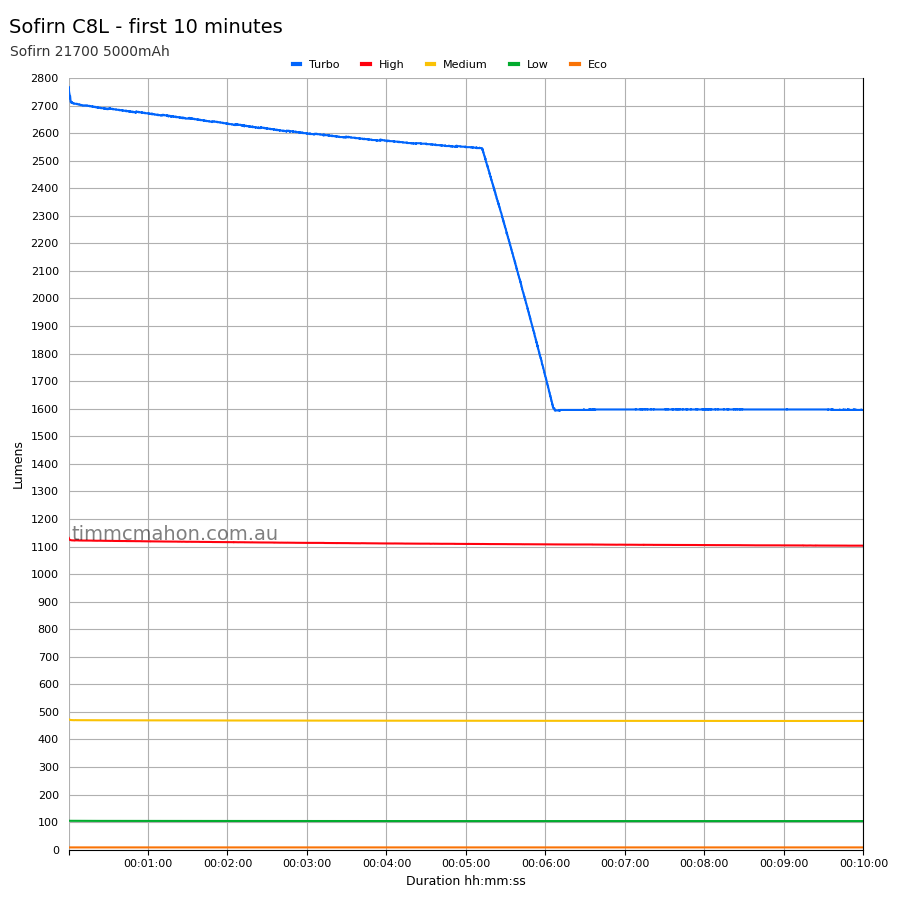 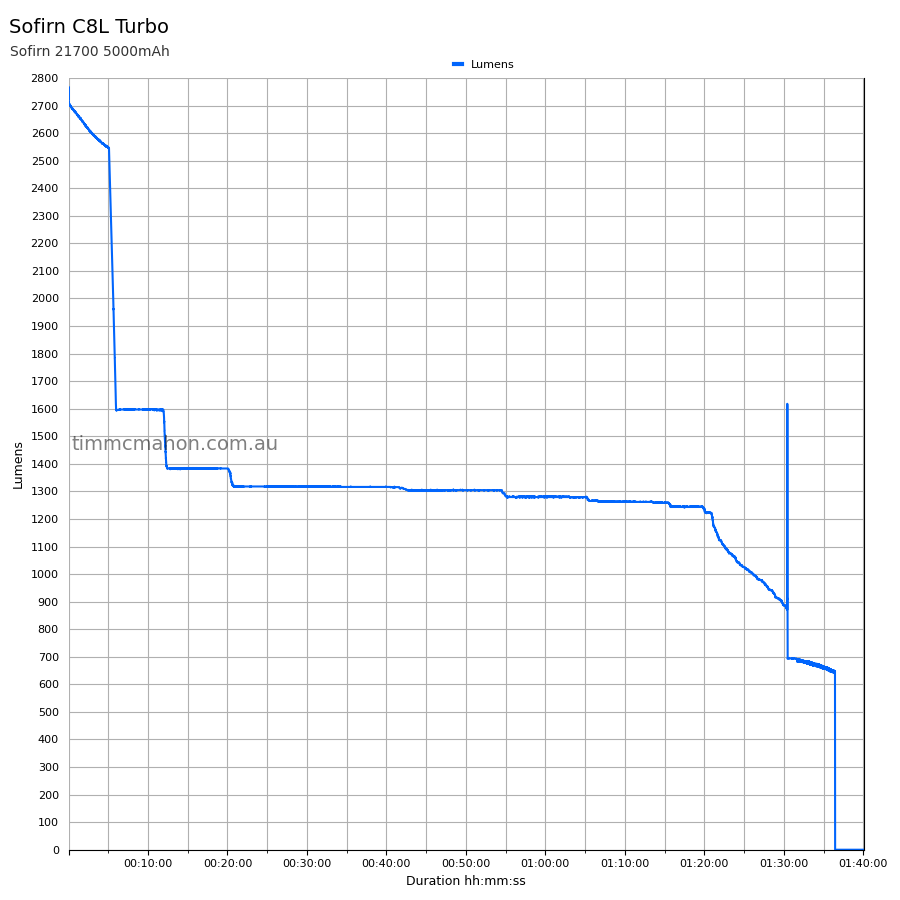 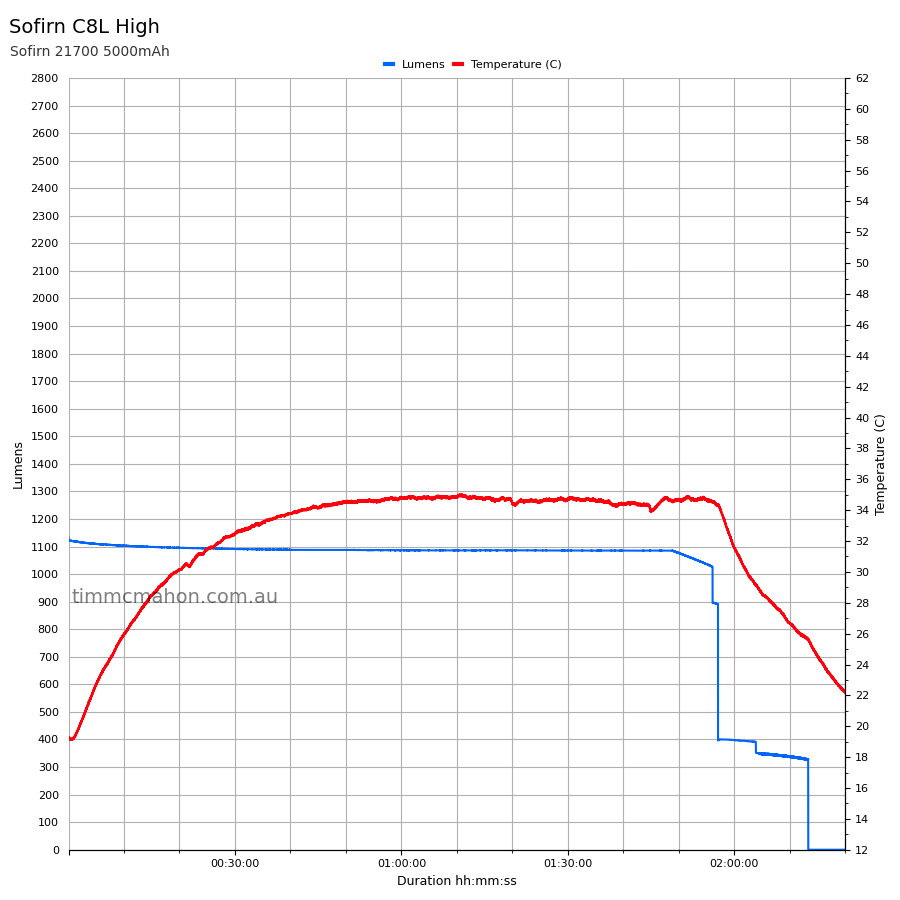 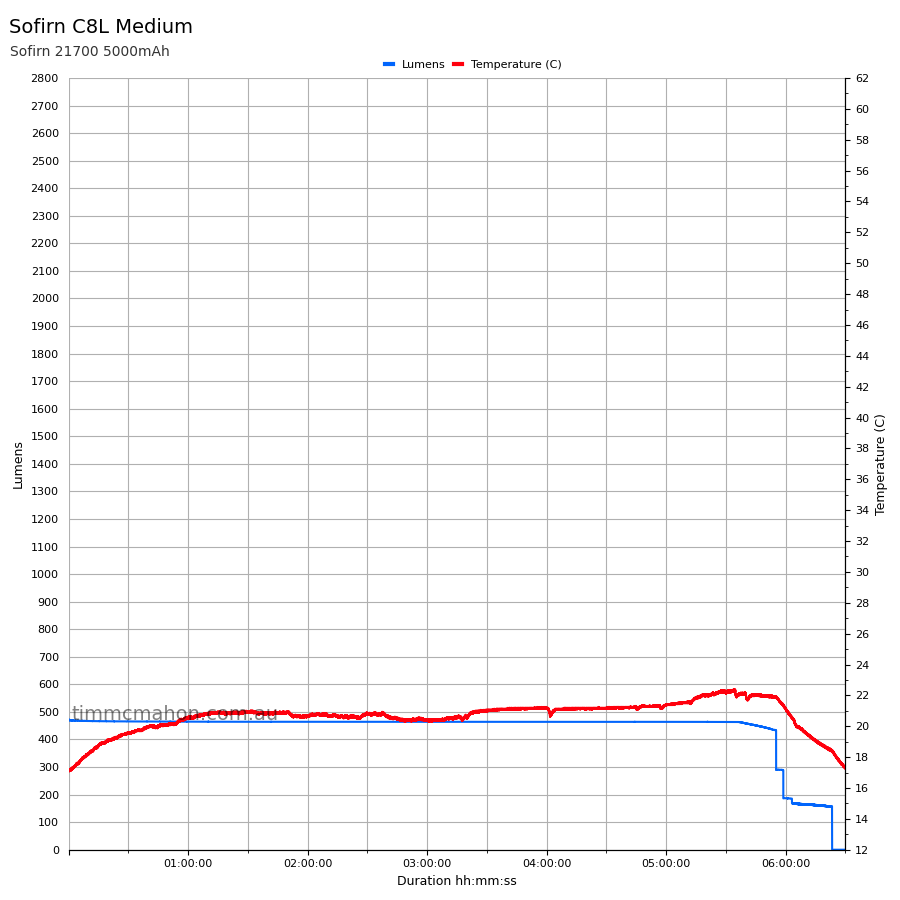 Turbo started at 2165 lumens, quickly dropped to 1500 lumens after a few minutes, dropped to a little over 1200 lumens after 20 minutes and maintained that output for another 40 minutes before switching off. The unusual spike in output near the end of the Turbo runtime also appeared in a runtime chart in Jacob’s Sofirn C8L vs C8G & IF22A video.

High maintained around 1100 lumens for almost two hours before switching off.

Medium maintained over 460 lumens for almost six hours before switching off.

I only tested Low and Eco modes for ten minutes because their expected runtimes were for 26 hours and 220 hours respectively.

It would be nice if Sofirn added more details to their ANSI/NEMA FL1 Chart so that it clearly indicates that Turbo may only last a few minutes before reducing in output. Turbo does not last 1 hour 45 minutes at 3100 lumens.

The High mode may be ideal for hunters who want 1100 lumens for almost two hours.

I took lux measurements with a UT383BT at 30 seconds for each mode. Each mode was measured at five metres. 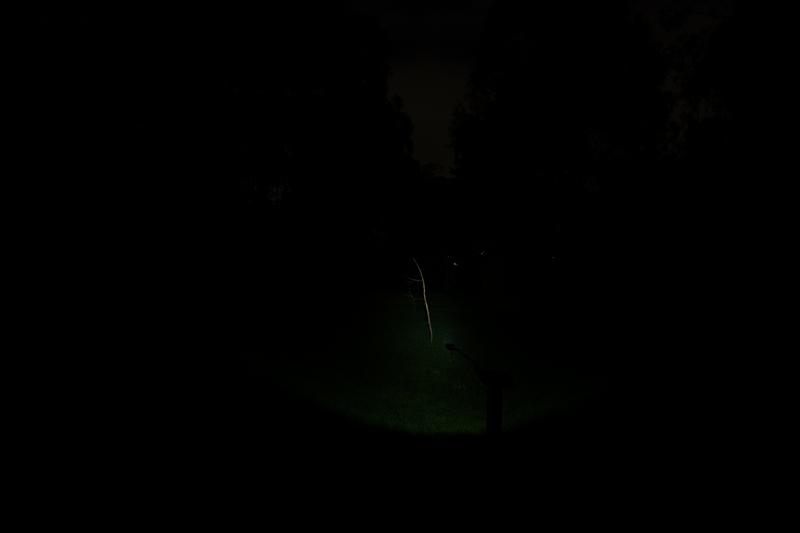 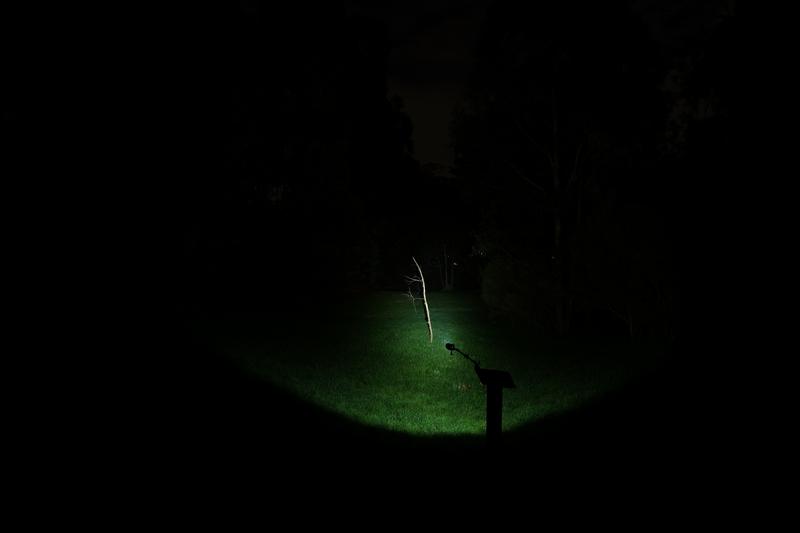 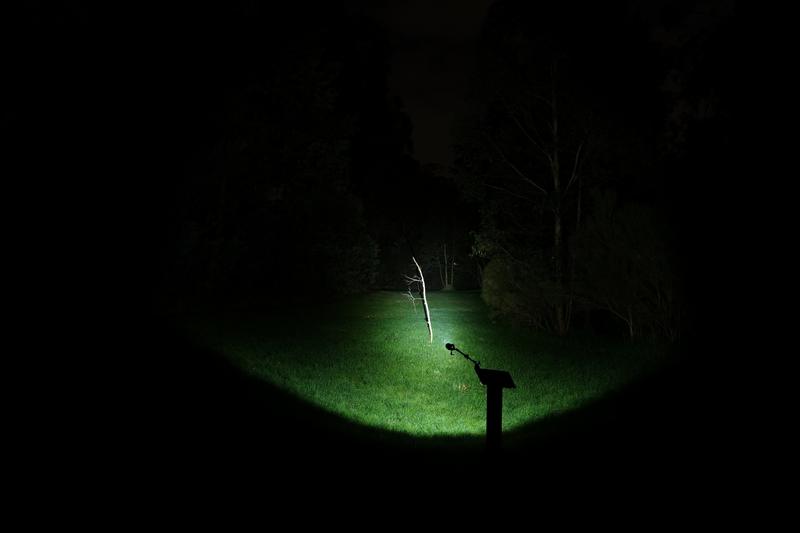 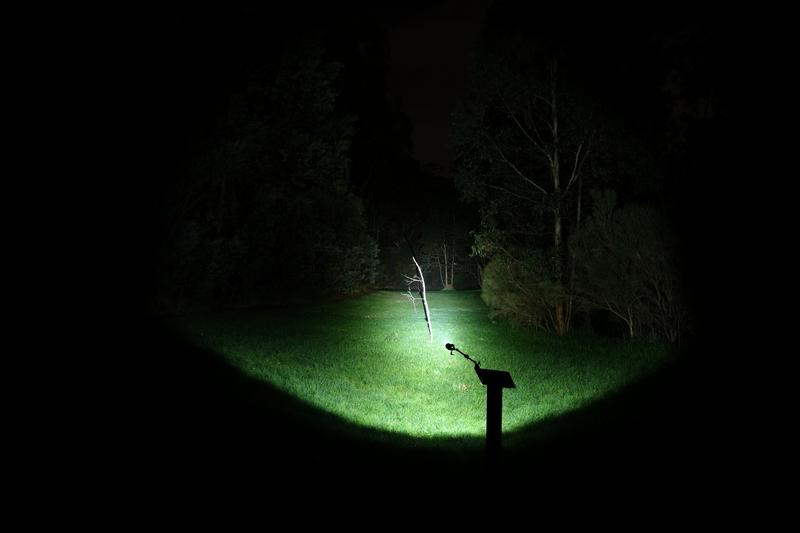 The Sofirn C8L is a good small thrower for hunting at close range. The beam produced is wide, smooth and cool. It is low CRI, but I do not expect high CRI for this type of torch.