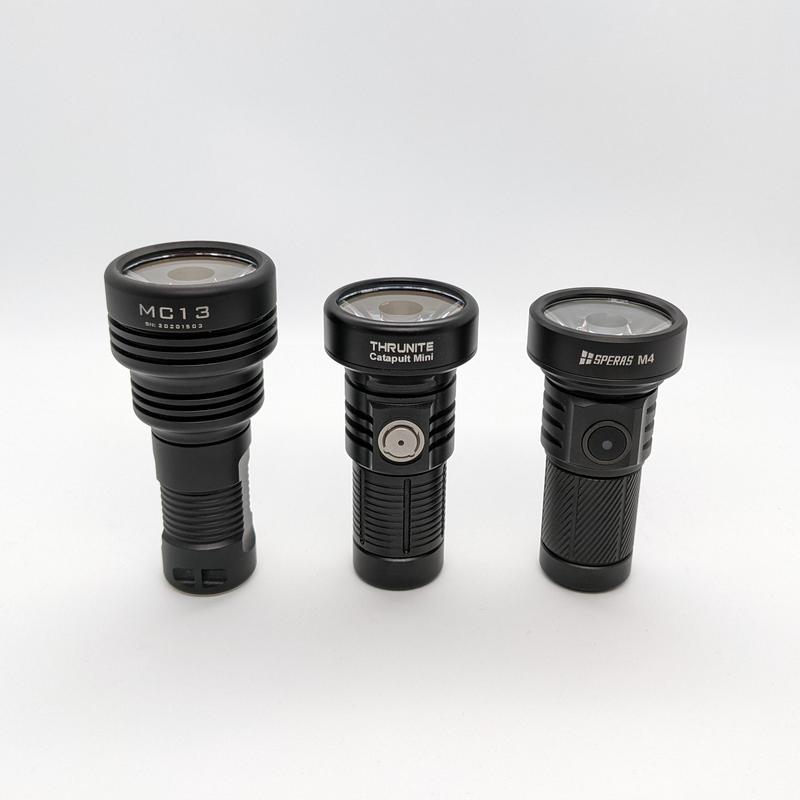 Here is a quick comparison of the Manker MC13 White, ThruNite Catapult Mini and SPERAS M4.

I will refer to the Manker MC13 White as MC13, the ThruNite Catapult Mini as Mini, and the SPERAS M4 as M4.

Anodising is good for all three torches. The TIR optics all have a little mark in the corner due to the manufacturing process where they snap the TIR optics out.

The MC13 is the largest of the three and it feels like a powerful pocket thrower. There are no sharp edges. The pocket clip is screwed in, so it may be difficult to remove the pocket clip and maintain water resistance. The e-switch in the tailcap has a solid metal button glued to a silicone pad. If you twist the button it will break the glue. Manker also have an 18650 tube for the MC13 for additional capacity.

The Mini is smaller than the MC13 and the quality is also good. Built-in charging is a nice addition. The button is also metal but it is on a side e-switch. The tube has some sharp edges. There is lanyard hole in the tailcap. A branded lanyard was included.

The M4 looks very similar to the Mini but they are not identical. The M4 is a few millimetres shorter. The Mini tube fits in the M4 head but the M4 tube does not fit in the Mini head. There are no sharp edges. I prefer the knurling of the M4 compared to the Mini because it provides more grip and it is not sharp. There is a lanyard hole in the tailcap. A generic lanyard was included.

The Mini has an Osram KW CSLNM1.TG LED.

The M4 has an unspecified LED. It is not an Osram according to SPERAS.

Each torch has a TIR optic. They look very similar. The LED in the M4 might be a bit bigger than an Osram KW CULNM1.TG and the beam looks smoother, warmer and greener compared to the two Osram’s.

USB-A to USB-C works.
USB-C to USB-C does not work.

To take lumen measure, I built a lumen tube and forked bmengineer’s project RuTiTe to add support for a VEML7700 light sensor and MCP9808 temperature sensor with help from Owen. Calibration lights from maukka were used.

I used the included 18350 cells for each torch while taking measurements. 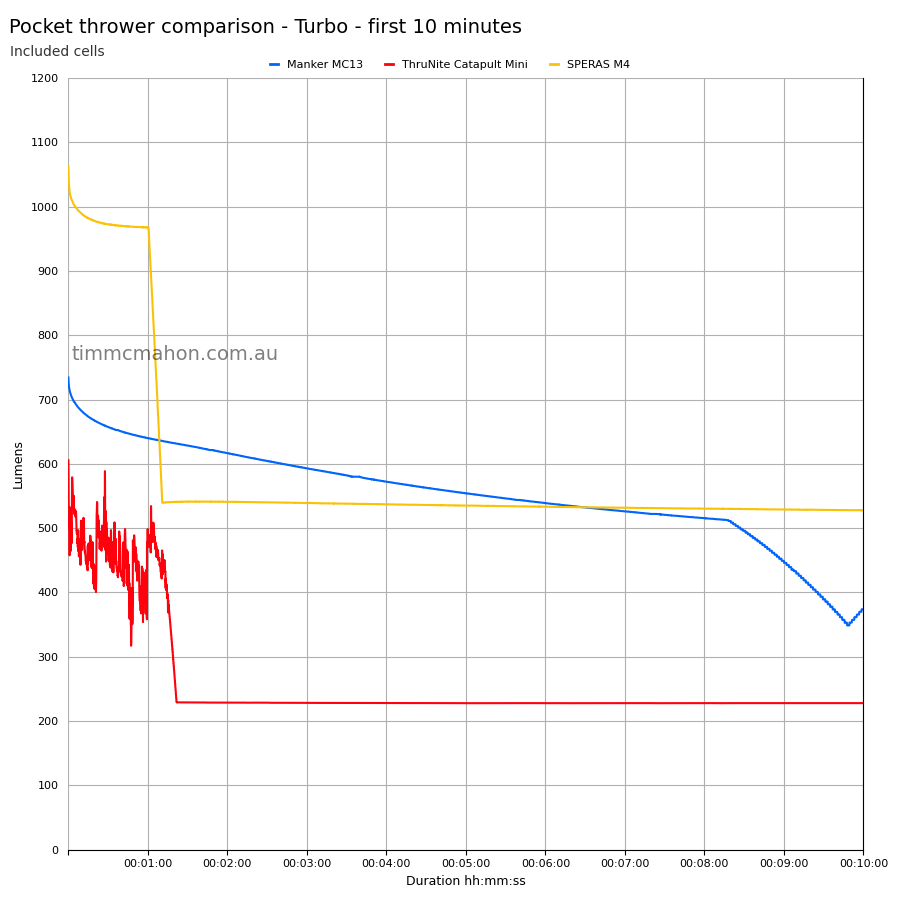 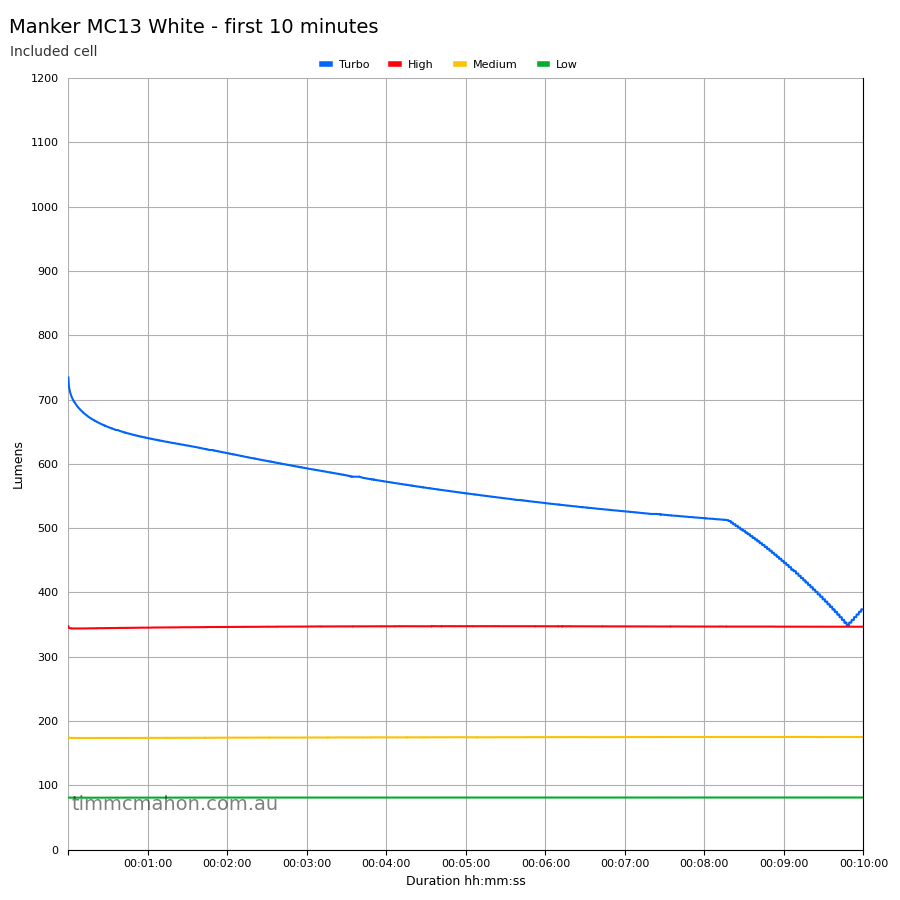 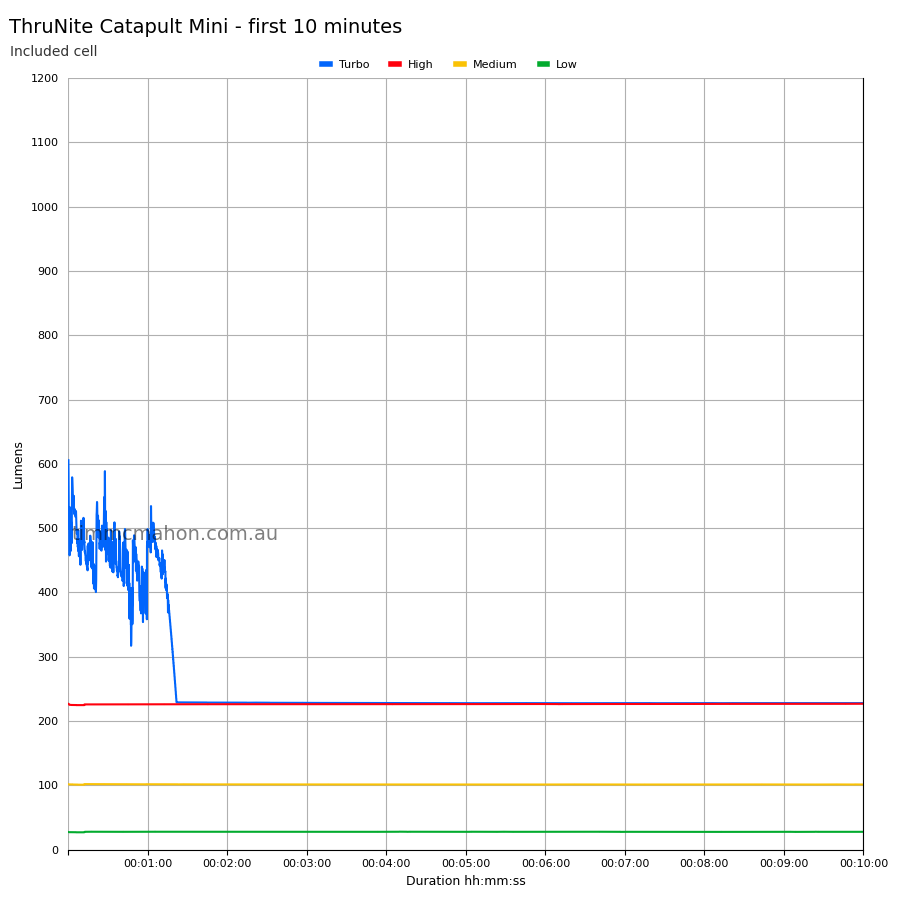 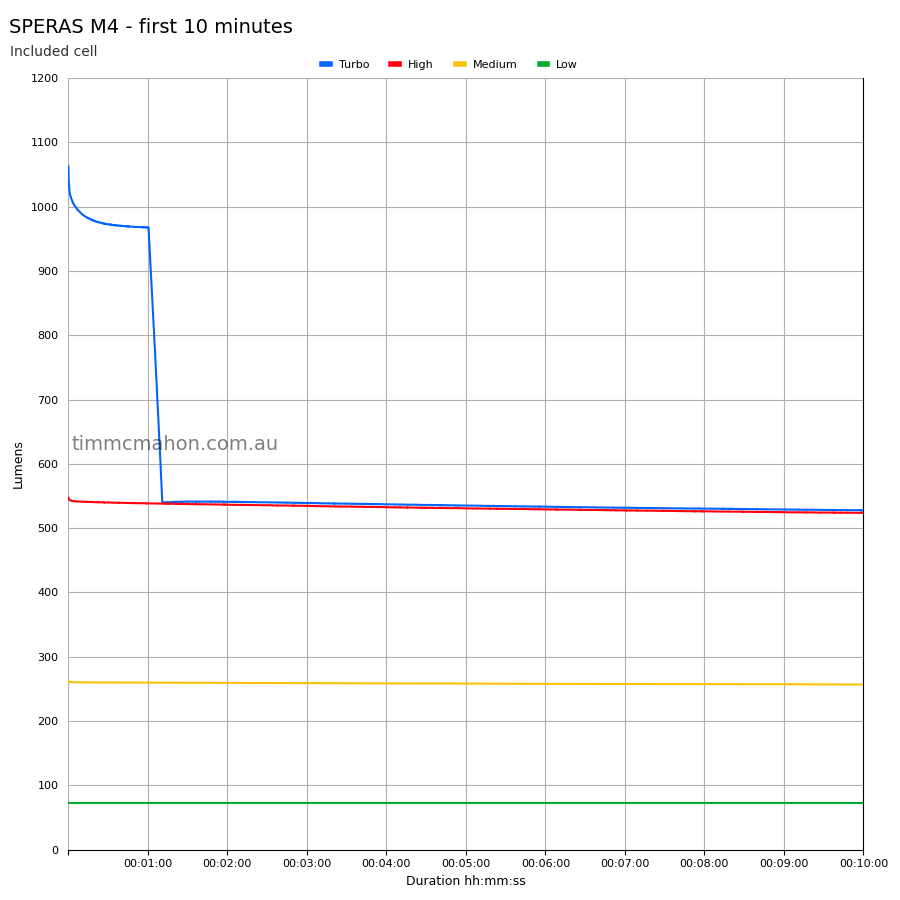 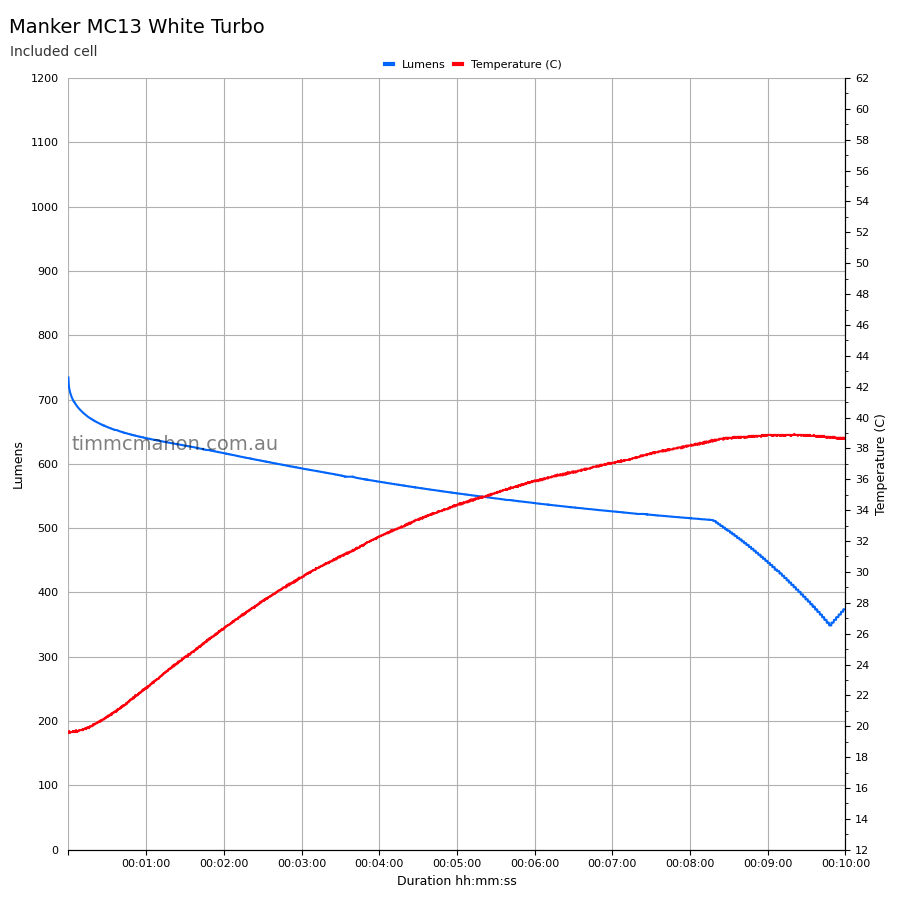 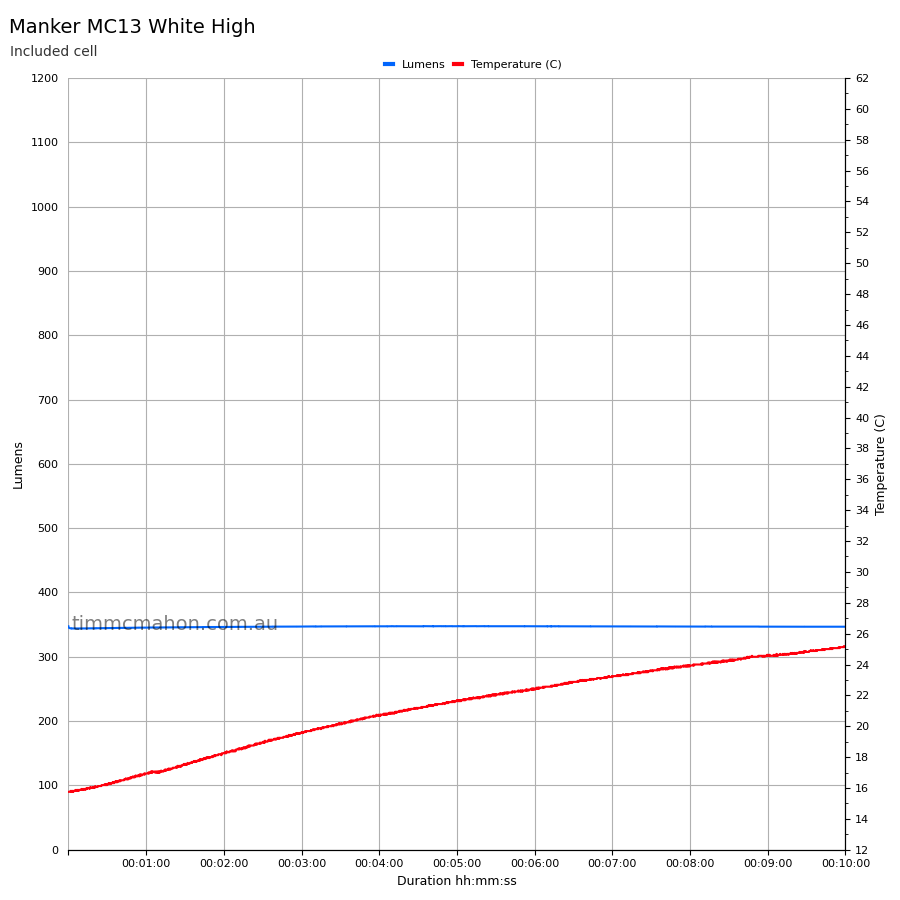 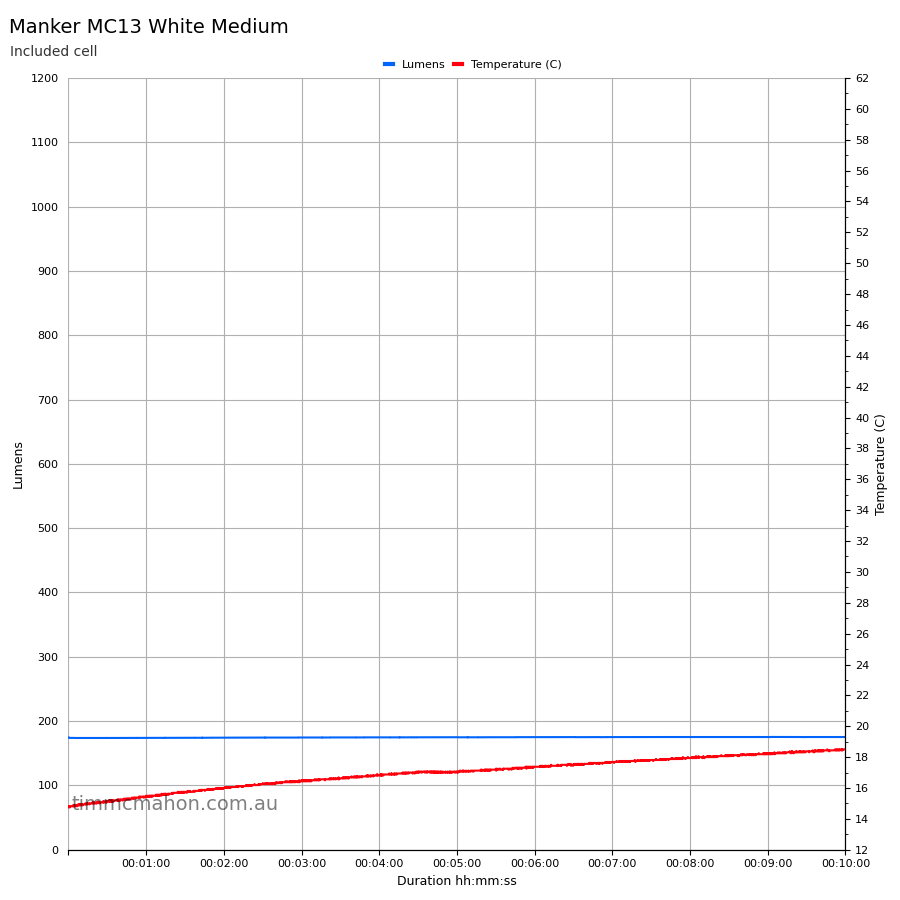 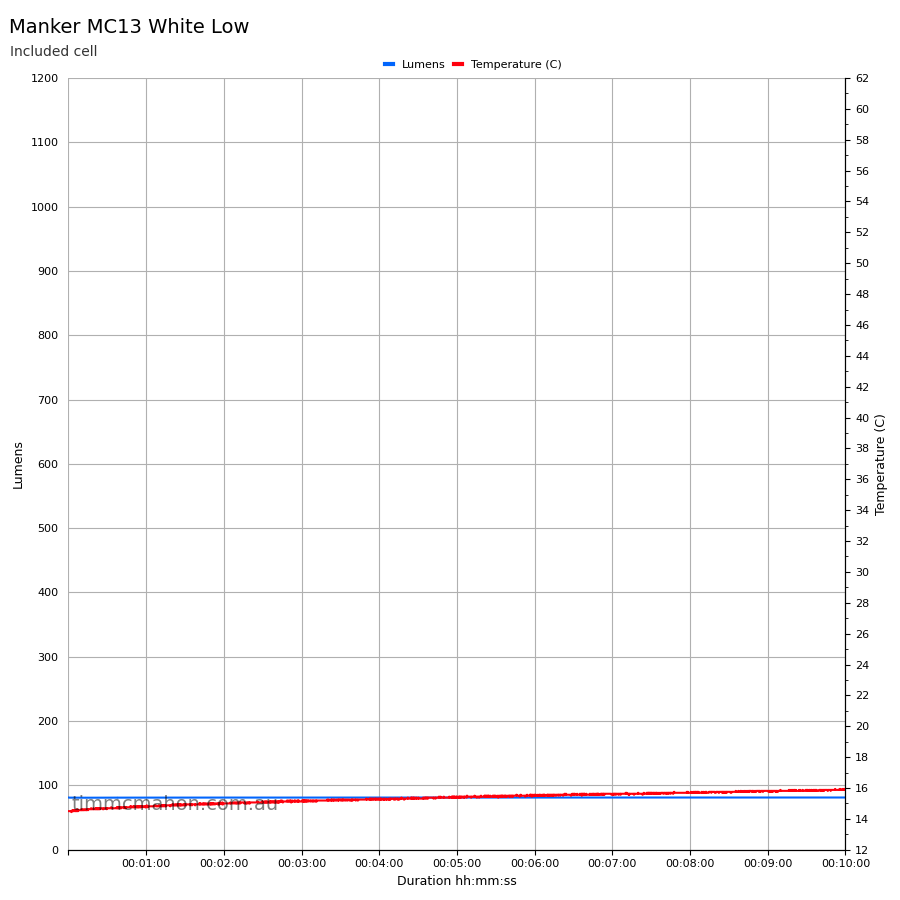 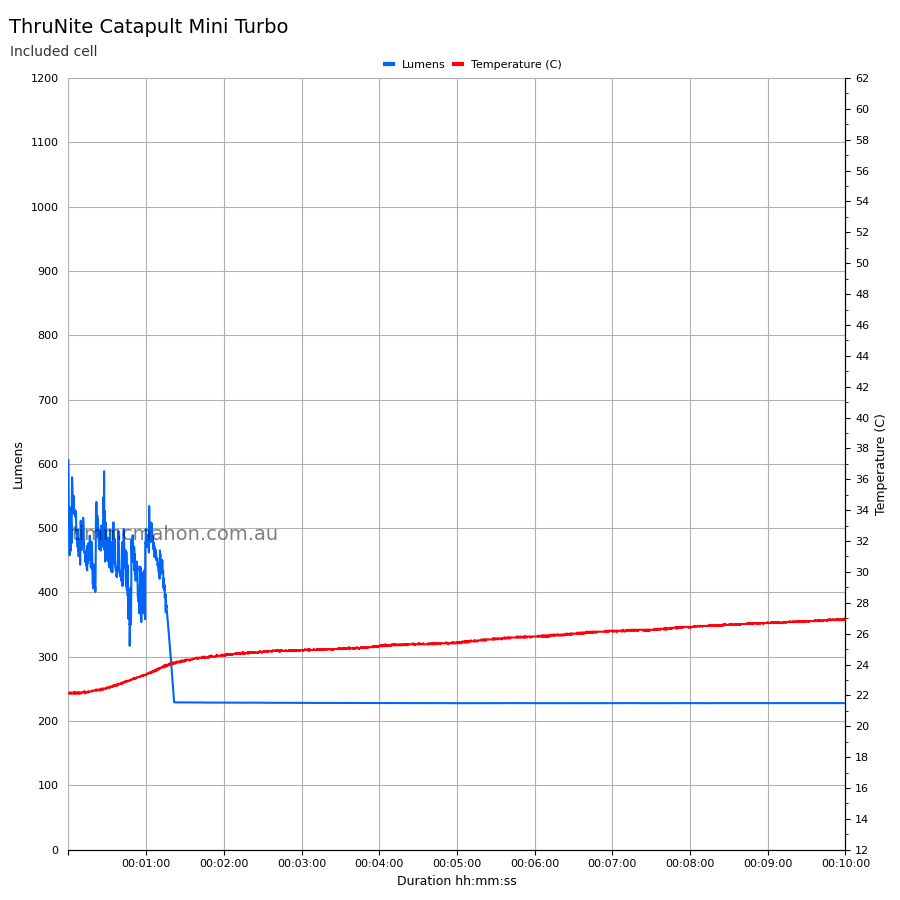 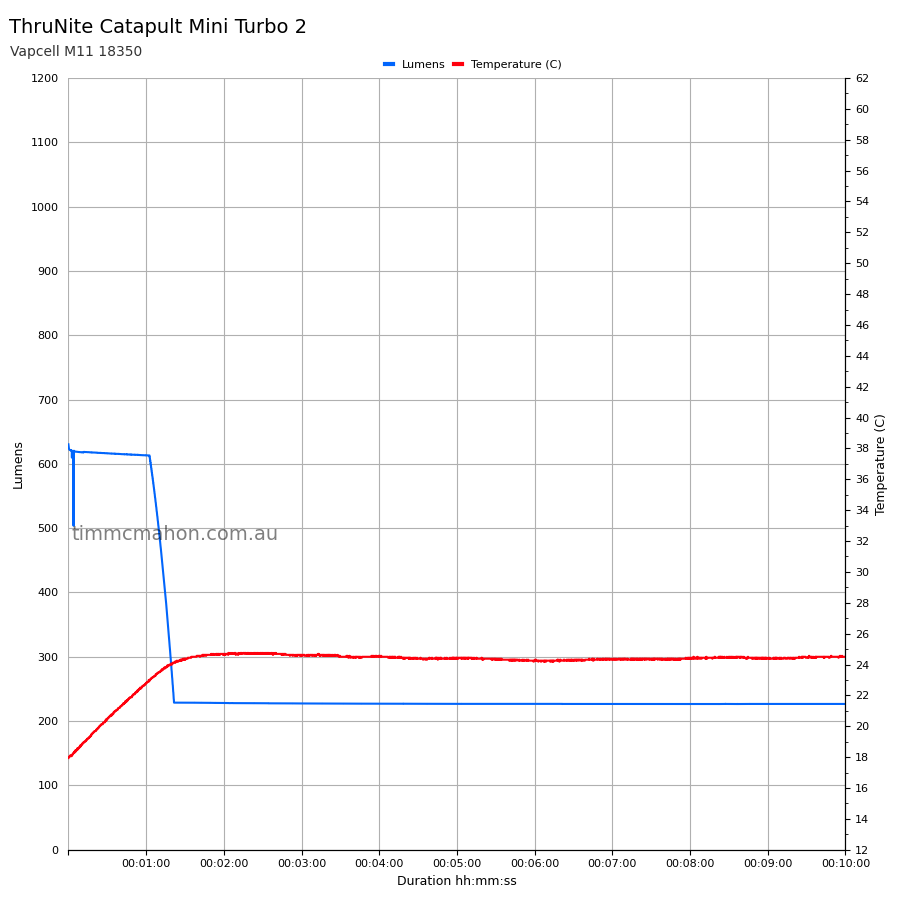 I ran the Turbo runtime test again with a different cell (Vapcell M11 18350) and the output was much more stable. 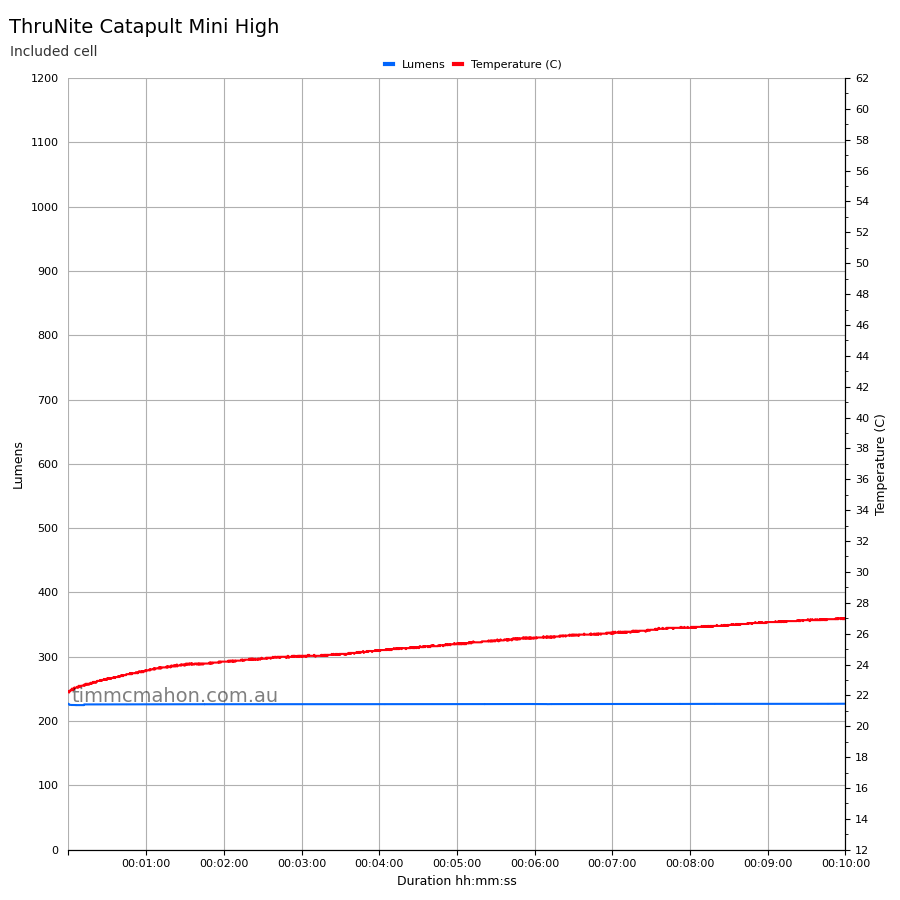 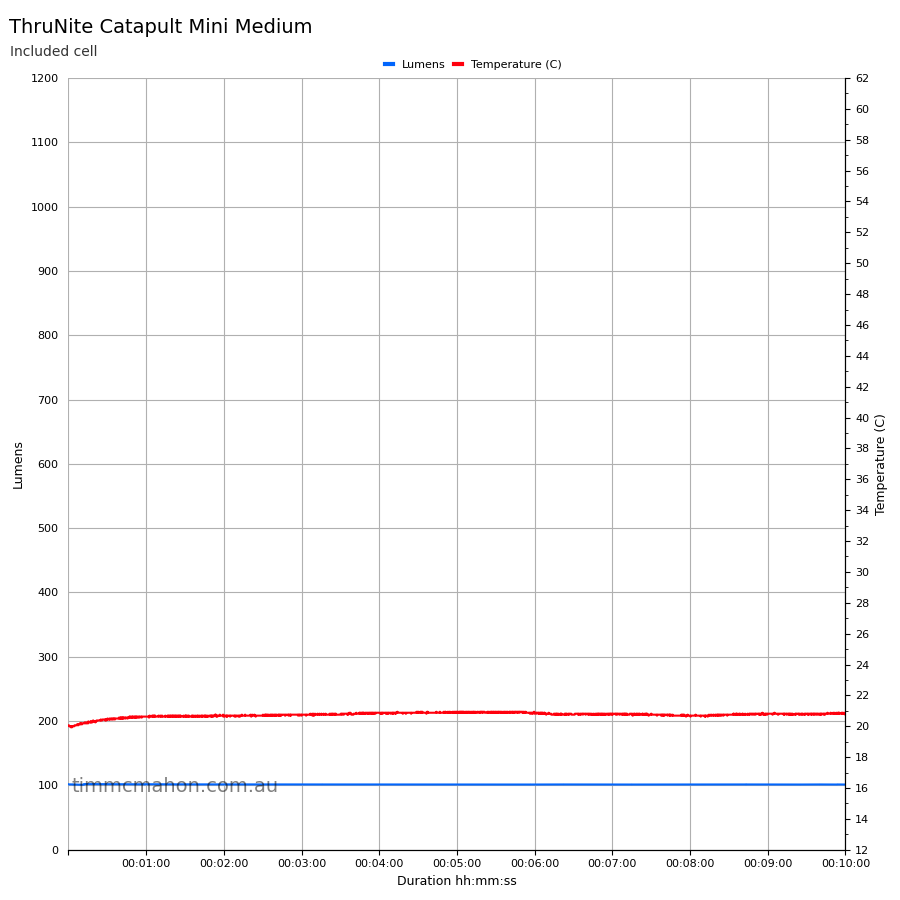 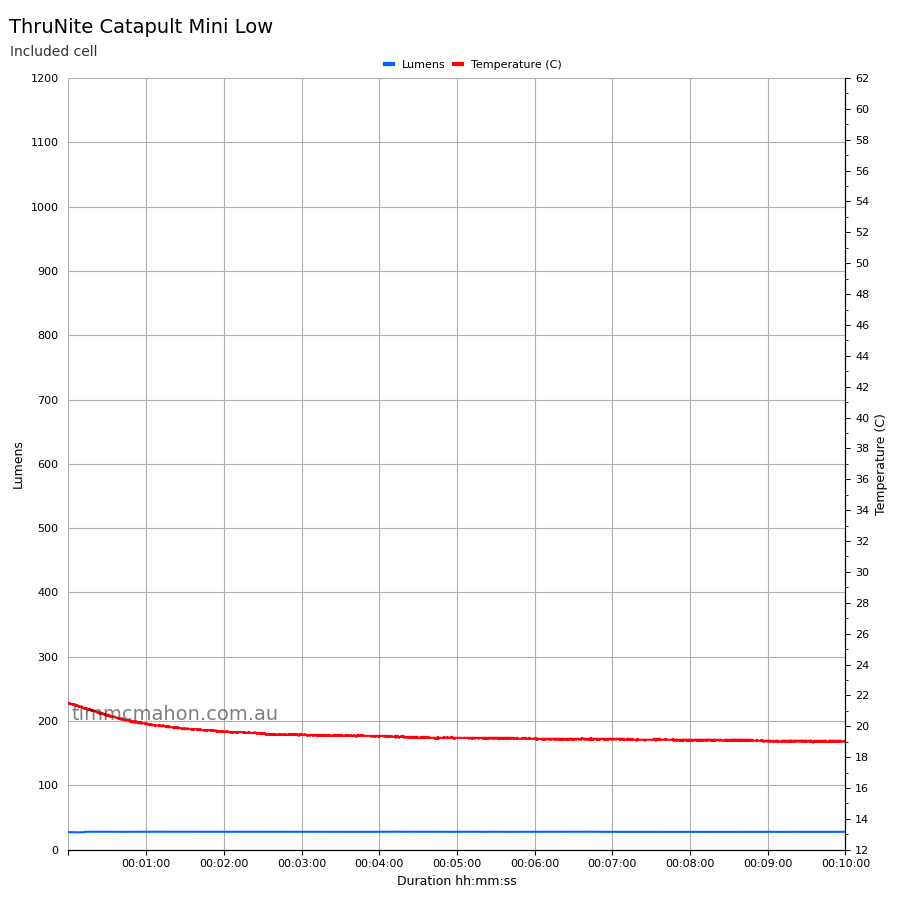 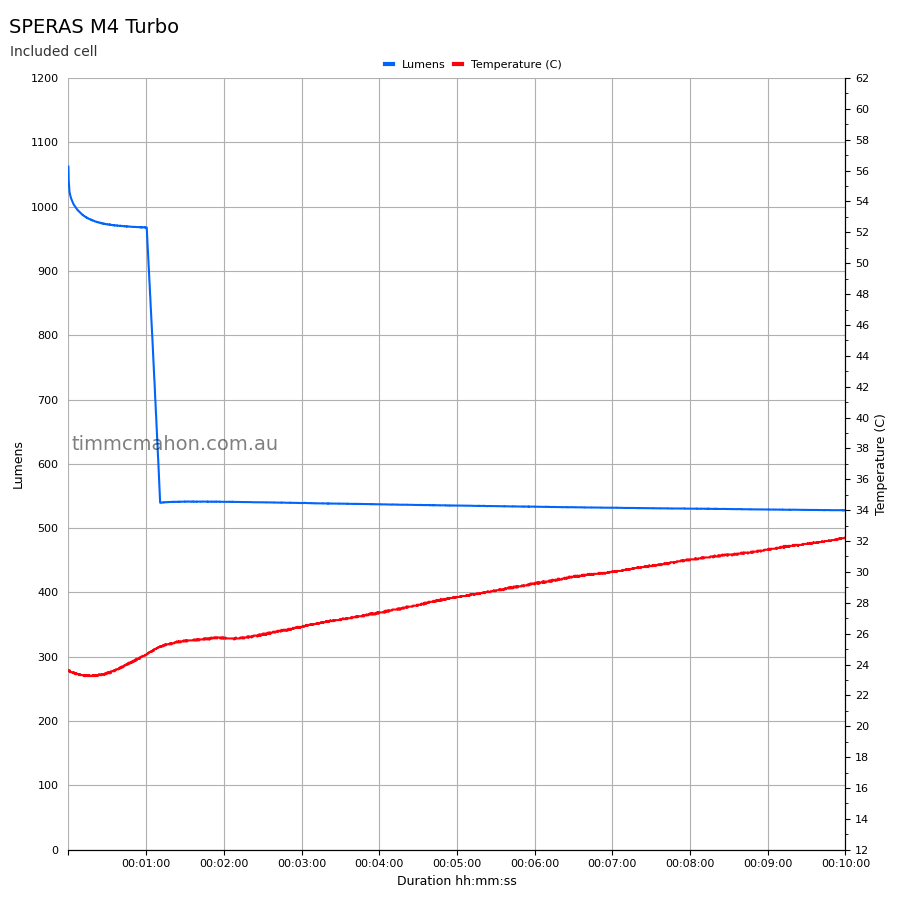 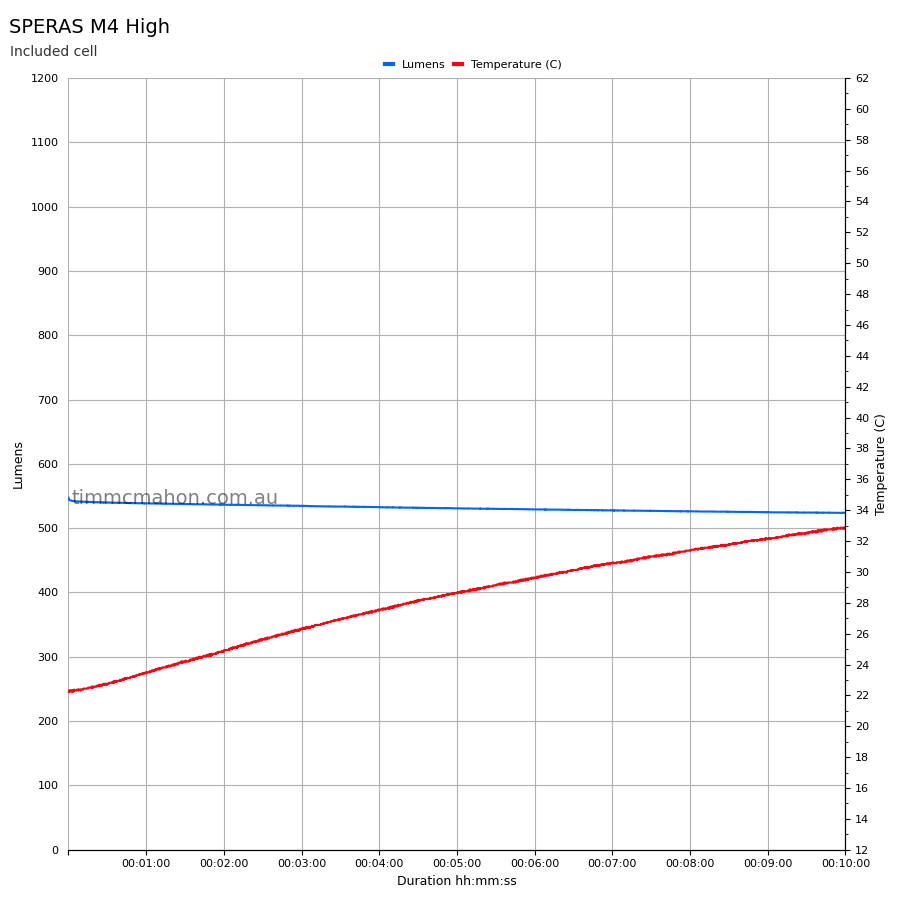 I took lux measurements with a UNI-T UT383BT. Turbo, Low, Medium, and High were measured at five metres after 30 seconds.

The Manker MC13 White is a solid pocket thrower but my personal preference is for a torch with a side e-switch.

I bought the ThruNite Catapult Mini due to the smaller size and the side e-switch.

I was going to swap an amber Osram LED into the Mini, but I will swap one into the SPERAS M4 instead because I prefer the knurling and the build quality of the M4.